My name is Tommy and I am the lead elder of Firebrand Christian Church in Ireland. I came to know Jesus about 17 years ago, after a fairly colourful childhood, including being a victim of abuse, which set my life on a crazy course. At the age of 11, I was already doing things I shouldn’t have been doing. I always felt like I wasn’t wanted or needed or accepted. My parents loved me and gave me so much, but I was always a bit of a loner because of what had happened to me at a young age.

At 15 years of age, I found myself at a crossroads in my life. I had two sets of friends. One group was into sports like me, while the other was into robbing cars, sniffing glue and taking drugs. I chose the second group of friends, and within a year I was locked up in a juvenile detention centre. From there on out, my life spiralled out of control. At the age of 17, I was shot at point-blank range with a shotgun. It’s the first miracle I saw in my life. At the time I didn’t recognise it as God, but looking back, I see the hand of God all over it. I was shot from a foot and a half away, and it’s safe to say that it’s impossible to miss from that distance, but it was like the hand of God smacked the bullets away.

I had once again been shot at point-blank range. I died about four times whilst in hospital.

I didn’t learn my lesson, however, and I kept on going, landing up in hospital seven times because of extreme violence. At the age of 31, I found myself at the hands of another gunman, and this time it was really bad. I ended up in a coma for 4 months. I had once again been shot at point-blank range. I died about four times whilst in hospital. I knew I was dying, teams of paramedics were around me, and I knew I needed to call out to God – and He saved me. His grace got me through that, but I still didn’t learn from that lesson.

After that, I ended up hooked on coke (cocaine) and I ended up in a really dark place. For three years I was crazy and so full of fear, because I didn’t know who had shot me, so I was fearful of them coming back for me and trying to kill me again. I didn’t sleep for three years at night time, I’d just nap during the day. I was hooked on cocaine, heroin and all the things that go along with that lifestyle. One night, I found myself in a car park on my own on New Year’s Eve. I had loads of money and loads of cocaine, but I just felt empty and I started crying. I ended up telling my friend that I wanted to end my life, but he just laughed it off and told me to go and sleep.

Four days later, I had an encounter with Jesus that changed my life.

I’d fallen to my knees a hopeless heroin addict, but I got up off the ground a brand new person.

I was at a Christian friend’s home and we were watching this documentary about a lad who was a part of the paramilitary in Ireland. He spoke of how nothing enabled him to be the man God wanted him to be, who he wanted to be, until he picked up the Bible. At that moment, something happened. It was like I had a vision of Jesus on the cross looking down at me on my knees, crying…and all I could do at that moment was ask Him for forgiveness. I just started screaming, ‘Jesus, Jesus, Jesus, please forgive me!’ All I could see were my own sins that had put Jesus on that cross, and how I deserved to be condemned, but then all I saw in Jesus’ face was compassion and mercy. I stood up. I’d fallen to my knees a hopeless heroin addict, but I got up off the ground a brand new person. I didn’t have any withdrawals.

That was 17 years ago, and my life has never been the same since, all to the glory of God. I had been around Christians many times, but I had never grasped what it meant that Jesus had died for my sins; I couldn’t comprehend it. All I asked God for was forgiveness, and He gave it to me, but along with that, He gave me everything. I just want to praise Jesus!

Tommy, otherwise known as ‘Hammy’, leads Firebrand Christian Church in Dublin. He is married to Brenda and they have three grown sons. Tommy is passionate about evangelism and seeing the church reaching their local community. 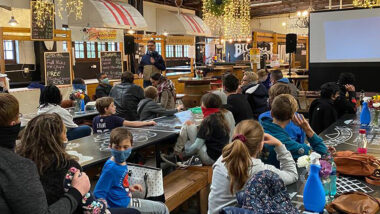 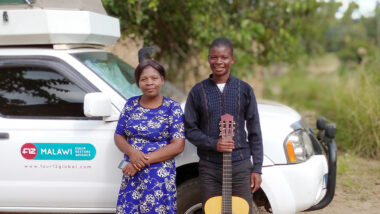 Adventure of a Lifetime
Highlights of 2020 in Malawi.