It was hot and uncomfortable for the two men on the hill. It was tense. They needed to talk. The younger man shifted his weight from foot to foot, aware that an awkward conversation was coming, but knowing that he needed to wait for the other to begin it. He looked sideways at his uncle, who eventually broke the silence.

‘We can’t argue like this,’ the older man said, squinting at nothing on the horizon. ‘And this land just isn’t big enough for both of us.’ His nephew regarded a loose stone at his feet, bracing himself. He always knew this day would come, but knew it would never be on his terms. His father’s brother had the hierarchy within the family to give him an instruction and he knew he’d have to follow it. He was about to be told to make way so his uncle could have the best of the land. He gritted his teeth, re-examining the stone and waiting for the inevitable. This was just how things worked, he shrugged to himself, and he’d have to make do.

The words hung in the air, as if the land itself was surprised by them. Had his uncle just said that he could choose which part of the land he wanted?

Abram dramatically reversed ancient protocol by offering his nephew the choice of the land, revealing what an extraordinarily humble man he must have been

The young man looked out across the land properly for the first time since they’d stood there, and suddenly he saw possibility unfolding on one side. To the east he saw deep green, rich soil and plenty of water. It reminded him of the fertile land in Egypt, next to the life-giving Nile. It reminded him of a land he’d dreamed about owning, farming, cultivating. Most of all, though, it reminded him of the garden of God. He knew that what he said next could ensure prosperity and prestige for the rest of his life, and so he spoke clearly and deliberately: ‘I will go east,’ he said, ‘into the plain of the Jordan.’ His uncle simply looked out over the land and nodded his head.

It was there that Abram and his nephew Lot parted ways. Abram headed into a land called Canaan, while Lot followed the shimmering green trail towards a place called Sodom. Within a matter of years, sulphur would rain down upon that green, fertile plain, turning it into a smouldering ash-heap.

Many of you will have read this account of Abram and Lot going their separate ways in Genesis 13:1-18. Something immediately stands out: Abram dramatically reversed ancient protocol by offering his nephew the choice of the land, revealing what an extraordinarily humble man he must have been to have done so. He wanted peace, not power, and we get an insight into his character through this historical record.

Looks Good to Us or God?

It’s Lot, though, who gives us a lesson that I believe we need to take into the year as the people of God. He chose his land according to what looked good to him, and it proved his undoing. It made perfect sense in every way – it was green, well-watered and held potential. It would’ve been the envy of any ambitious man, so Lot made the choice any person would make if they were simply looking at the world in a normal way.

It’s when we look at the green, fertile plains and forget to ask God what He thinks that we run into problems.

We learn something, however, not only from what he did in the situation, but from what he failed to do. Lot did not appear to have consulted God. Without his path being set by God, all he was left with was what looked good to him, and what he deemed a future success. Interestingly, it was immediately after Abram and Lot parted ways that God again spoke to Abram, reassuring him of his inheritance. Anyone simply watching the two of them walk away from each other would’ve pitied the older man and envied his nephew. But Abram had heard God, and that was the difference. Lot’s surface-level choice led him into the attractively-framed path of destruction, while Abram, who walked with God, became the father of a nation.

Four12 is a partnership of churches around the world that are joined in heart and purpose, and we all continually have a choice to make in the cities and regions where God has placed us. As we stand looking out over the land before us, we must decide what type of people we’re going to be: Lot or Abram? Will our course be set according to what looks good or what God has said? Will we follow our own wisdom or heaven’s? Will we play by the world’s rules or by God’s? Tellingly, we’re told that the land to the east reminded Lot of God’s own garden – he was following a memory, an impression, an echo.

Will our course be set according to what looks good or what God has said?

What is the lush, fertile plain that looks so good to the people of God but might not be where God is found? I think there can be many trappings, but I want to zero in on one.

The Pull of Popularity

I read a quote recently by a young man who left a Christian heavy metal band and is now a pastor, and immediately I thought of the story of Abram and Lot. He said that the so-called ‘prosperity gospel’ is quickly being replaced by what we can call the ‘popularity gospel’. In other words, for a long time there has been (and still is in many places) a strong emphasis on God’s people becoming wealthy as a sign that He is among them. Today, however, there seems to be another type of currency among God’s people, which is the idea that God is truly among us when we are well-known, well-liked, attractive to outsiders and having huge amounts of fun. It’s becoming the new calling card for the church, and it makes every bit of sense to the natural human mind. After all, the more popular the church is, the more people will join, and the more we’ll fulfill Jesus’ command to go and make disciples of all nations, right? The problem is, we might just be looking down over a beautiful land that is ultimately going to be destroyed.

What’s not reasonable to assume, however, is that the church is able to stay popular.

To be clear, fun is good and we should be having it. Lots of it, actually! To be clear again, the blessing of God on His people will cause us to be well-regarded and popular, because love, enthusiasm and excellence can be seen when the hand of God is among a people, and those things are attractive. In fact, it’s perfectly reasonable to assume that the church is capable of becoming very popular through simply living out the gospel message. What’s not reasonable to assume, however, is that the church is able to stay popular.

The Popularity of the Acts Church

As always, a look at the church in Acts gives us the full picture. They were popular and well-regarded initially (Acts 2:47), but they lost their popularity (Acts 8:1) and didn’t seem too concerned about getting it back. (Imagine Peter: ‘Guys, remember my sermon at Pentecost, and that enjoying-the-favour-of-all-the-people thing we did? We need that again. John, I want a mid-preaching shot of me on social media with a profound quote. Bartholomew, I want bigger welcome signs for the parking lot volunteers!’) In fact, Acts 5:13 tells us that at one point they were well-regarded, but no one dared to join them, which is just kind of weird from a PR point of view. But they didn’t think so – they just kept doing what they were doing. They were following God’s voice, not the attractiveness of the land in front of them.

Imagine if Paul had measured his effectiveness by his popularity.

Imagine if Paul had measured his effectiveness by his popularity. Initially loved and respected as a zealous rabbi and feared by the church. Then born again, hated by the Jews and still feared by the church, who didn’t know if he was tricking them. Then fetched by Barnabas and loved by the church. Then assaulted in Philippi, then smuggled out of Berea, then sneered at in Athens, then harassed in Ephesus. Picture this one: in Lystra he was worshipped and then stoned within a matter of minutes. If popularity had been the man’s goal, he would’ve lost his mind.

It shouldn’t actually be anyone’s goal. Our goal as a people should be to hear God’s voice and obey it. Sometimes the land will look green and awesome, and sometimes it’ll be a scratchy, stony wasteland. If God is leading us into it, though, it doesn’t matter – we’ll be with Him and we’ll be doing what He wants, no matter the results. It’s when we look at the green, fertile plains and forget to ask God what He thinks that we run into problems. Mind you, they don’t always immediately show themselves to be problems, but they’re ultimately incapable of producing what God wants.

And that’s why we need to have the faith of Abram, who would go on to be known as Abraham after God covenanted with him. He wasn’t following some green illusion of what he thought was God – he was walking with God. He waited for God’s voice, and that voice led Him to fruitfulness. May that be our testimony. 04 Treasures
The heart behind partnering with the resources God has given us. 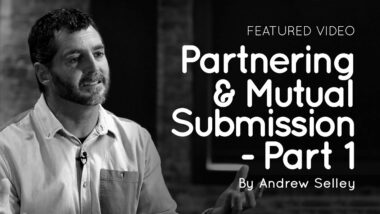 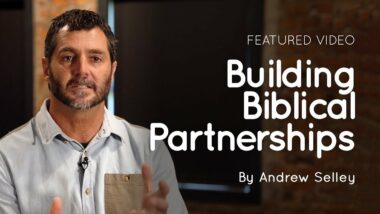 Building Biblical Partnerships
Does it matter how we relate to the broader church of God?